Marilyn recently returned to the United States after living in France

and Belgium for 20 years. She worked for large global consultancies,

academically associated firms, and was co-director at a small French

Marilyn is currently serving on the Avisory Board, Tufts Center

planning projects with a Belgian utility company and a French/American

While working with a large consultancy, she introduced organizational learning both internally and throughout Europe and the U.K. She delivered presentations for executive seminars coached junior consultants and did systems diagnosis for client situations (example, a banking merger).

Since returning to the US, Marilyn has continued consulting with executive and entrepreneurial teams. She assisted a Boston suburb's Department of Health & Human Services in developing team capability. This assignment involved an assessment and skill building seminars.

Marilyn coached a large French company's Boston division's  Franco-American executive team. She interviewed the team members, designed and delivered a seminar based on a systemic assessment of the interview themes. The seminar included systems  dynamics skill building; enabling the team to design initiatives that had the the most potential for leverage in their system.

While living in France, Marilyn traveled to Israel numerous times to better understand the practices of deep listening, dialogue and decision-making processes among the Bedouins and Druze . She lived in Salama, a Bedouin village in the north of Israel, and traveled through the country with a Bedouin guide to visit the wise men and women of the Bedouin and Druze communities.

Danish Journal Issues from the House of Futures

Marilyn's research paper: Learnings for Organizations from the Bedouins and the Druze

Marilyn's presentation with photographic portraits of the wise men and women:

Bedouins and Druze, Stories of Dialogue, Conflict and Resolution

Board and Volunteer Activities 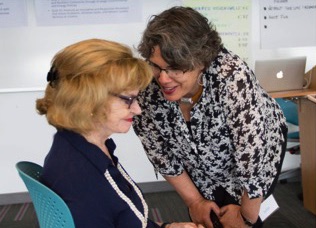